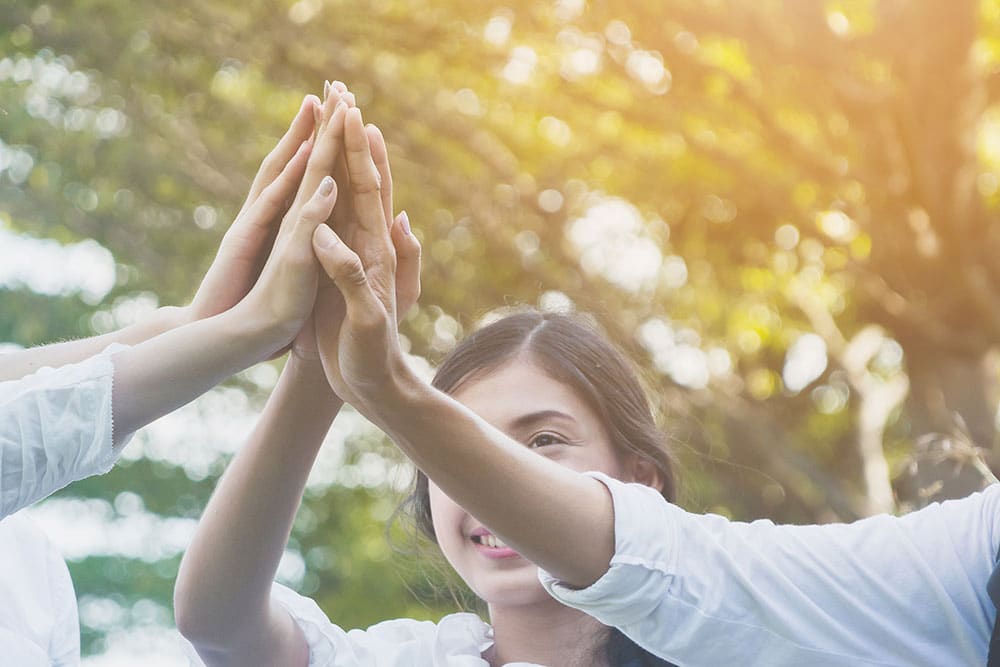 By charitableadvisorsOctober 28, 2019Feature
No Comments

The need was out there. It was just flying a bit under the radar until a women’s group took it upon itself to recognize it and do something to fill it.

Like many parts of Indiana, Wayne County, in the eastern part of the state along the Ohio border, had a growing Hispanic population. That also meant a growing set of language challenges for Hispanic women and their families when it came to medical care, specifically in the maternity ward.

At a time when communication is vital, especially during impending deliveries, doctors had trouble getting their messages across and their instructions understood. A stopgap solution was to have Earlham College students serve as translators. But babies don’t always arrive on a timetable, and students weren’t always available.

The women’s solution was to provide a grant to train medical translators for the maternity ward.

“We sent two women (to be trained as medical) translators, and today one of them is working fulltime at the Wayne County Health Center after receiving more training. At that point, the doctors were all men and (change) was slow with the hospital. They were surprised that we identified that need,” said Mary Jo Clark, one of the co-founders of the Women’s Fund. “We have been able over the years to identify a lot of needs in the community.”

The fund’s first grants were given in 2006, and since then, the group has given out over $258,000. The Women’s Fund is one of four funds targeted to women and girls at the Wayne County Foundation.

And this isn’t the only Indiana community where women provide funds to make their communities better places for women and girls. There are seven community foundations that host women’s funds, according to Elizabeth Gillespie, a doctoral candidate in the School of Public Administration at the University of Nebraska-Omaha, who has just completed a study in partnership with the Women’s Philanthropy Institute based at the Lilly Family School of Philanthropy.

While women’s funds started in the 1970s, it wasn’t until 1991 that the National Network of Women as Philanthropists was established. It would later become the Women’s Philanthropy Institute (WPI), and a free-standing nonprofit. WPI moved to the Lilly School of Philanthropy in 2004 and expanded its mission to include research and education. Its signature series, Women Give, is an annual publication.

The report, Women’s Foundations and Funds: A Landscape Study, was released in May. A companion publication, based on the second phase of in-depth interviews with fund leaders will be released in December.

Gillespie found patterns studying more than 200 women’s foundations and funds to demonstrate the positive change for the broader community from an investment in women and girls. Five funds from Indiana were included in Gillespie’s report. Of these, four – the Women’s Fund of Central Indiana (Indianapolis); Southern Indiana Women’s Fund (New Albany); Women’s Fund of Wayne County (Richmond); and Women in Philanthropy of Madison County (Anderson) – were interviewed for this story.

They vary in size and activities, but all support nonprofits in their local communities, reflecting the idea, according to the report, that women’s foundations and funds “connect the well-being and success of women to the well-being and success of their communities.” All talked about the collective impact beyond grantmaking their efforts are having, and most rely entirely on volunteers for events and committee work.

The first in Indiana, the Women’s Fund of Central Indiana, was launched in 1996. At the time, a feasibility study led a group to action, and Julie Cagle, the consultant who led the study, became part of the inaugural staff. Jennifer Pope Baker, its executive director since 1998, said the impetus came from the grassroots level, not from the foundation where it is housed.

According to Pope Baker, a group primarily of women wondered why the needs of women and girls were not receiving the same attention as boys and families. They wanted to learn why that was the case and what could be done about it.

“The why really was that women typically have silent problems that are easy to ignore — teen pregnancy, domestic violence, hidden addictions and those sorts of things. They weren’t violent problems that were tearing at the fabric of our society,” said Pope Baker.

And accept the challenge, they did.

The next step was to seek a home. Serendipitously, Ken Gladish, the then-Indianapolis Foundation president, thought that joining forces could be mutually beneficial. He recognized that the foundation lacked diversity, and believed a partnership could give the Women’s Fund instant credibility and provide the foundation gender diversity. He sweetened the pot with a $1 million match to launch fundraising and the group accepted his offer and the women’s group became a special fund of the Indianapolis Foundation.

Other funds in Indiana started in similar ways with a woman or group of women identifying the need to focus on women and girls and a desire to make a difference with their donations.

For example, Richmond, which has had a women’s fund since 2001, last year awarded a grant to two high school seniors. For four years, the girls had enrolled in what traditionally was considered the boys’ domain – an auto mechanics class. Both had landed jobs in the profession after graduation. Recognizing that a lack of strength put them at a disadvantage, the girls requested money to purchase a car lift. At the fund’s annual luncheon, the girls were awarded the funds, and in addition, received a classroom plaque to acknowledge for future generations their barrier-breaking efforts. In response, the awardees arranged a meeting with underclassmates sanctioned by the school’s administrators to interest more females in the coursework.

Each of Indiana’s women’s funds has developed its own grant-giving approach to fit the needs of its community. Several have taken a giving-circle approach, raising money through dues memberships and then distributing the funds in the calendar year.

New Albany began its efforts in 2005 with an endowment, but after careful study in 2017, made the shift to a giving circle. Two of the four funds at the Wayne County Foundation are giving circles. The others – Indianapolis, Anderson and two in Wayne County – are set up as special interest funds of the community foundation.

New Albany’s initial effort was a biannual dinner. President Lori Lewis said it was a successful dinner, but the growth was slow.

Earlier this month, at its annual dinner, the women awarded its third grant — $106,000. Each year the number of women has grown, enlarging the distribution. Lewis said the change has also caused grantees to dream big. Its first awardee, St. Elizabeth Catholic Charities, put in a commercial teaching kitchen for women to teach culinary arts skills, and as a result, find good paying jobs. Last year it funded self-esteem camps for girls in Floyd, Clark and Harrison counties. The group has also committed to fund the original endowment to respect the fund’s originators.

Initially, the Women’s Fund of Central Indiana had a cadre of women investigate different models of women’s funds to determine its best course of action. Their recommendation was to create an endowment of at least $4 million before making any grants to ensure it would be a growing fund. Today, the endowment is about $16 million.

Over time, it has awarded not only program funds, but also general operating, believing that a nonprofit cannot provide quality programming without operating dollars. Recently, it changed the language for its grant initiatives to caregiving, violence against women and economic mobility. It has also provided significant support for several initiatives, including a commitment of $10 million to Bellfound Farm.

“Our First Next Initiative helping to incubate and launch Bellfound Farm, a residential urban farm designed to help young women coming out of the criminal justice system with re-entry and a lifetime of economic security coupled with extraordinary mental health support, will be extraordinarily significant,” said Pope Baker.

“The work that we’re doing with our next initiative to help women and girls who are 18 to 24 years old who are underappreciated and fall through the cracks to really engage in a thoughtful path to economic security is incredible.”

For all, community foundations have been the incubators. In fact, Sally DeVoe, the executive director of the Madison County Community Foundation in Anderson, started the effort in 2005 with the first task of raising visibility.

“We started the endowment, but we never made an issue out of the endowment until much later. We looked at it and said, ‘The money doesn’t need to be paramount. What needs to be paramount is that women understand they need to give the money and why they need to give the money,’” said DeVoe. The group is actively growing its endowment through its Century Club and its annual luncheon.

“We’re raising $10,000 a year, and certainly more than that. But we’ve just set that as a doable goal in a community like Anderson in Madison County where we haven’t been on the best side of the economic fence for a while. We’re coming back and stronger than ever, so we’re beginning to address some things and able to address them financially and, you know, emphatically,” she said. The group’s annual luncheon draws close to 200 women.

All the funds see the need to democratize philanthropy and create buy-in from the women in their communities. They have all found innovative ways to cultivate philanthropy. From silent art auctions to annual luncheons to a conference, all with the goal of raising the profile of women.

In the beginning, Pope Baker said women were not as good at asking for the funding they deserve, but she has seen a big difference and credits the women’s fund for being part of that difference.

“Women are not good at giving money to themselves, treating themselves well or donating to other women. What they want to zero in on is children, families and caregiving without looking at the fact that there are an awful lot of women in need,” she said. “I think a different look at women’s roles has been the thing that I’ve seen change the most.”

Wayne County Foundation’s development officer Rachel Hughes recognizes that more women are giving after the establishment of the different funds.

“I feel good about the fact that we have empowered them to give philanthropically, and that doesn’t have to be to the foundation. We are helping them to gain their voices to be heard philanthropically in our community, whether that’s supporting strictly women’s organizations and programs or anything that they care passionately about.”

From day one, the Women’s Fund of Central Indiana has planned for the future with philanthropy education.

“I believe that you do not turn 50 or 60 years old and start writing big checks to organizations to whom you don’t have a connection. So we have been cultivating and developing relationships since the day we opened up our doors to engage people so they will want to support our work in a way that’s meaningful for them and the right time. We are always excited when more people want to join us in making positive change, join us in helping women and girls have all the tools they need to be economically successful. When a woman’s successful, a family is successful, and when a family is successful our community is as well,” said Pope Baker.