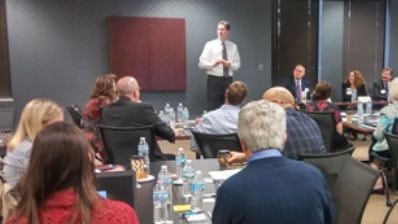 By Shari Finnell, writer/editor Charitable Advisors When Bryan Orander launched Not-for-Profit News in 2001, the internet had not yet reached its saturation point; only 52 percent of American adults reported using it at the time, according to the Pew Research Center. And Orander considered the e-newsletter as nothing more than a project to keep him […]

This is one in a series of articles about area foundations and is intended to give readers insight into a foundation’s giving and designed to increase transparency and understanding in Central Indiana. By Lynn Sygiel, editor, Charitable Advisors   [ see also: Prevention Matters initiative ] Who says you can’t go home again? Not Claire Fiddian […]

By Jim Dwyer, reporter, New York Times As it happens, Donald J. Trump is not the only person to announce plans to shut down a personal philanthropy, just the best known. This is the story of a man who made and kept that same promise. Nearly five years ago, Charles F. Feeney sat in a […]

By Oliver Balch, freelance writer, The Guardian |  India is the first country in the world to enshrine corporate giving into law. Following a change in company law in April 2014, businesses with annual revenues of more than 10bn rupees (£105m) must give away 2 percent of their net profit to charity. Areas they can […]