By charitableadvisorsMarch 19, 2018Feature
No Comments

This is one in a series of articles about area foundations and is intended to give readers insight into a foundation’s giving and designed to increase transparency and understanding in Central Indiana.

Who says you can’t go home again? Not Claire Fiddian Green, the president and CEO of the Richard M. Fairbanks Foundation.

Fiddian Green is what is called a boomerang or a come-back employee. After nearly five years away, she returned to the foundation in 2015.

A Kronos and Workplace Trends study found that returning employees can positively affect workplace cultures and they have the advantage of knowing how the organization functions. 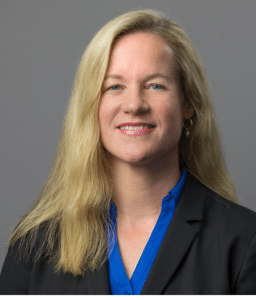 Fiddian Green agrees with that assessment.

During her first three-year stint, she was a program officer for the foundation. In 2010, she left to become president of The Mind Trust, an Indianapolis-based nonprofit that works to improve public education by encouraging entrepreneurs to develop or expand educational initiatives. Her next career move was to the public sector, first as executive director of the Indiana Charter School Board and then as the governor’s special assistant for education innovation and reform.

When Fiddian Green returned to Fairbanks, she brought with her vital background knowledge of grants, and previously established relationships with both grantees and staff.

She not only had a new title but a new charge – to work with the board to create a vision for the foundation’s future.

For nearly 30 years, the foundation operated under the guidance and leadership of its founder and president, Richard M. Fairbanks, who had established broad giving parameters. When he passed away in 2000, Leonard J. Betley stepped up as board chair and president/CEO.

In late 2014, winds of change swept over the organization. The board elected a new chair – Daniel Appel — and announced Fiddian Green’s hire. And there were other changes. Betley stepped down, but remained on the board, Roger Snowdon, board vice president and treasurer, left those two positions, and Betsy Bikoff, the vice president and chief grantmaking officer, who had been at the foundation since 2002, left to start a consulting practice.

Together with Appel, the new board chair, Fiddian Green dove in.

“It gave an opportunity for the board to take a step back and reflect. It was a great time to take stock of the past 15 years, and think about where we would like to be headed. We had most of that first year to plan,” she said, because Betley and the board had intentionally committed to multiyear grants.

“I think the board was excited to think about what our new direction would be, and they’ve been incredibly supportive,” she said describing the internal visioning process with her 10-member board.

In addition, Ellen Quigley, the foundation’s newly promoted vice president of programs, and Fiddian Green spent a lot of time talking to people in the community to get their perspective on what were the big challenges and opportunities facing Indianapolis.

In a concentrated three-month time period, they met with about 60 community leaders, some foundation grantees and some not.

“That was very informative to hear what people who represent different sectors were thinking about what’s going on in Indianapolis and where their minds were,” Fiddian Green said.

“And then the second big thing that people were just starting to talk about was the opioid crisis. They told us, ‘We’ve got this problem. And it’s impacting our ability to retain employees and hire people,’” she said.

Outside the city, they also talked with a number of foundations that were similar to Fairbanks  – city-focused with common focus areas. They also benchmarked with affinity philanthropic organizations, Grantmakers in Health and The Philanthropy Roundtable.

“Our board went through about an eight-month process, and at the end of 2015, it adopted a mission statement, it codified values that the foundation had always operated by writing them down, and it established a third focus area. We had been making grants in education, but had not called it out as a focus area. We also reaffirmed health and the vitality of Indianapolis as giving areas and sharpened all the focus areas to increase impact,” Fiddian Green said.

For each of the three focus areas, the foundation determined goals and matched its giving to those priorities. Today the foundation has about $300 million in assets. What didn’t change was the application process, which is still fluid and requests can be made anytime. One staff member is the contact for all initial inquiries.

Research initiatives and advocacy were added to the foundation’s giving portfolio. During the planning process, staff had identified foundations that resonated — the Joyce Foundation based in Chicago, and the Laura and John Arnold Foundation in Houston, the Houston Endowment, and the Lumina Foundation. All are involved in policy work, which Fairbanks saw as an important role for the foundation to play.

As a focus area, health was especially challenging to fine tune. Past giving had been mainly for infrastructure building, making grants to public health, and operational dollars for safety-net clinics. These included projects like the establishment of the Richard M. Fairbanks School of Public Health on both IUPUI and Bloomington’s campuses.

As part of its process, the foundation brought in Paul Halverson, the founding dean of the School of Public Health, as an adviser and asked him: “What in your perspective is going on from a public health standpoint in Indianapolis?”

“Halverson helped us identify what were the big issues informed by data and from there we said, ‘What are the root causes of our poor health outcomes?’ The one thing we were really shocked by was that Indianapolis and the state of Indiana ranked at near the bottom of almost every measure of health. And so we asked the next question: ‘What are the drivers of that?’”

“The number one driver was addiction. Tobacco, opioids and obesity. We decided those were all really big challenges that we were just going to focus on two, and so we selected tobacco and opioids.

“We shifted from the 15 years of infrastructure building to say, ‘OK, there’s great infrastructure in place, but we still have really poor health outcomes.’ So what if we were to shift our grantmaking to focus on root causes and see if by directing some resources to target those two things, we can actually help to being part of the solution and make a difference in improving health outcomes for the city.”

Just over a year ago, the foundation formally communicated the changes and shifts at an open house for its new downtown offices in Regions Tower.

They had learned from focus groups that unless an organization was a grantee, members in the community thought the foundation was affiliated or an extension of Fairbanks Hospital. Up until this time, the foundation had been under the radar and had not proactively communicated its work.

If Fairbanks was going to be a thought-leader in the community and affect policy, there had to be a clearer community understanding of the foundation and its work.

The foundation spent nearly a year researching the issues, especially about tobacco and opioids.

“We knew they were problems, but we wanted to make sure we really understood the issues. We commissioned two reports from the School of Public Health, which were published in September of 2016,” said Fiddian Green.

So with a new brand, website and research reports, it started communicating the foundation’s work.

“That’s really step one, ‘OK, we’ve commissioned research, and we have some information that we’d like to share. And now that you know who we are, you understand where it’s coming from.’”

And communication was as important for their colleagues, and its added goal to collaborate and convene.

“When you’re talking about big problems like the opioid epidemic, there’s no one organization that can try to solve this problem on our own. Everyone has to work together, across sectors, certainly across funding partners from around the state and around the country.”

Internally, the foundation added capacity with one position focused on evaluation and research.

“We created and funded a full-time director of learning and evaluation. That has just been tremendous for us,” said Fiddian Green.

Alex Cohen is that staff person. He routinely scans the literature and reviews published research for studies and data that are relevant to the three focus areas. His work continuously informs the type of metrics the foundation should be tracking to determine if progress is being made.

For the focus areas, the foundation has created a dashboard, which is available on its website.

“The beauty of having the dashboard is that we’ve identified metrics that are going to tell us are we making any progress or not. In addition, we have metrics for each of our grantees and have committed to doing evaluations for many of our grants,” she said.

Adding evaluation capacity has added to time spent with grantees. Now, when the foundation make a grant, nonprofits are asked for the metrics they will use to track the impact of the work. That informs the reporting they provide and in turn informs the foundation’s board about the impact.

“We need to be really honest about the outcomes and if something is working, we should continue to support it, and if it’s not working then we probably need to try something new,” said Fiddian Green.