By charitableadvisorsApril 17, 2017Feature, Programming
No Comments

Six years ago Joyce Johnson was hired by Rock Steady Boxing’s board and charged with the task of figuring out a way to expand its program.

“We were getting calls from all over the world where people would hear about it, and they would call and say, ‘Where’s Rock Steady Boxing in Colorado Springs?’ And I would have to say, ‘I’m sorry, there’s only one Rock Steady Boxing, and it’s here in Indianapolis,’” said Johnson.

There was no long-range plan in place in 2006 when Scott Newman — at the time Marion County’s prosecutor and public safety director – started boxing. Newman had been diagnosed with early onset Parkinson’s disease, and his friend, Vince Perez, an attorney and former boxer, wanted to help. His intention was just to keep Newman active. 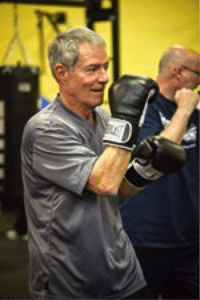 And so they started boxing in Newman’s basement. Newman started getting better. His tremors lessened, his balance improved, and he got stronger. He had lost his ability to type on his computer, and he got that back, and had a lot more confidence when he was in court.

“I often describe it as being serendipitous. He had no idea it was going to work when he started boxing. He and his bud were just trying to keep him active,” said Johnson.

By the time Johnson entered the picture, Newman and Perez had moved from the basement to a friend’s gym, and then opened the first-of-its-kind Rock Steady facility. Originally, Rock Steady’s board thought that Kristy Follmar, a former world champion boxer and one of the founders of the program, was going to be the Jane Fonda of home DVDs.

The board envisioned growth to be simple — sell DVDs to people with Parkinson’s who could then exercise in their living rooms. But it wasn’t too long before they realized that it wasn’t just the exercise.

“At our training camp, we teach people about Parkinson’s and the symptoms, we give them some boxing information and then we teach them why boxing is the most effective way to combat Parkinson’s,” said Johnson.

Training Camp (the boxing term for “seminar”) provides an overview of Parkinson’s disease, beginning boxing techniques and adaptations of our fitness program designed to combat 23 common symptoms of PD. The course includes classroom instruction, hands-on training and a workout in the gym with Rock Steady boxers.

Coaches should be at least 18 years of age and must attend the entire two-day seminar to be eligible for coaching certification, with an optional Saturday morning. This year’s camps are sold out until August.

“I think we all realized that the camaraderie in the gym, people all with Parkinson’s working together fighting back, there was just something to that. Plus it isn’t really safe to be in your living room doing a lot of strenuous exercises,” said Johnson.

When Johnson was hired in 2011, she read lots of articles about scaling nonprofits. She quickly realized it wasn’t a franchise operation they were hoping to establish. Rather it was a nonprofit helping people fight back against Parkinson’s, and they needed a diverse approach.

Subsequently, she and her team tackled a new design for expansion, beginning with writing a manual to replicate the program. Follmer had learned about Parkinson’s, had been a boxer and had developed a system, so sharing that experience was critical, and potential coaches needed to see the program in action. Soon the idea for a two-day training camp in Indianapolis was born.

Johnson emailed people who made those early phone calls looking for the Rock Steady program in their communities, and told them Rock Steady was launching a training program. That was in 2012, and it resulted in three affiliates.

“The biggest question the board has had, and probably all of us have had from the beginning is ‘Can you really replicate this?’” Johnson said.

“In the first six years, everybody thought that this whole program was Kristy and her enthusiasm and her boxing knowledge. She’s really special, and she’s got this big wonderful heart, and it just really embraces everybody. Everybody loved her and that’s why we kept growing (locally), and I think people thought that you couldn’t bottle that, that you couldn’t take her personality and replicate it.

“But it turns out that that you can,” said Johnson, who says the proof is in the videos posted by affiliates.

People who come, they have discovered, want to do this. 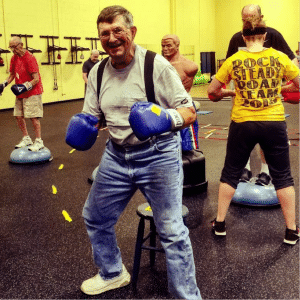 “They are fighting Parkinson’s, and that’s real different. This isn’t a random thing where somebody graduates with an exercise science degree and just decides to come take our training. That isn’t the way that it happens. They have some connection to Parkinson’s,” said Johnson.

In the first couple of years growth was steady. By 2015, there were 83 affiliates in 23 states and three international programs.

One of those affiliates was in New York City, and one of the participants was Aaron Latham, husband of CBS’ Lesley Stahl. Stahl pitched the story idea, and that November, a 10-minute piece aired on “Sunday Morning.” The rest is history. The phones started ringing and the website crashed, according to Johnson.

“It turns out that Lesley Stahl and CBS can do more for you in 10 minutes than you can do in 10 years. Sometimes, we just walk down that path already laid out. And so Rock Steady has been growing since then and will continue to grow,” she said.

The Indianapolis gym, the only stand-alone gym, has over 200 participants with two fulltime and four part-time coaches. The gym is open six days a week, and offers 19 classes for four different levels, which is based on the person’s physical condition and how advanced their symptoms are.

Membership at the Indianapolis gym is $60 a month for unlimited classes, with most people coming between 10 and 12 times a month. In LA where the cost of living is higher, Rock Steady charges $150 a month.

The affiliates’ programs are typically housed at another facility, like YMCAs, rehab hospitals and boxing gyms.

“Boxing gyms have added a Rock steady program during the daytime, when they’re normally empty. Most of the people who do Rock Steady are retired, come in the middle of the day when most of these buildings are empty of adults,” said Johnson.

One lesson the nonprofit has learned is that one Rock Steady program in a metropolitan area is not enough. In Central Indiana, for example, there are programs in Anderson, Bloomington, Brownsburg, Greenwood, two in Hancock County, one at the Westside Garden Plaza and the JCC.

People with Parkinson’s have difficulty driving more than 15 or 20 minutes, and many lose their ability to drive at later stages. The driving time added to a 90-minute class for many is their limit.

“So that’s why we keep saying there needs to be a Rock Steady in every community in the country. That’s the goal,” said Johnson.

Affiliates have to agree to do the Rock Steady method the way it’s prescribed and sign a contract with an agreement that classes will be group class only, adhere to the methods learned in Indianapolis and pay a yearly fee of $800. As an affiliate, sites can access online the coaches’ management system, which includes everything Rock Steady has developed over its 11 years.

“Every document, every waiver, even videos of how to put on gloves. Everything that we’ve developed once they’ve become an affiliate they have access to. We don’t want them to reinvent the wheel. We want them to do it the way that we have taught them to do it,” said Johnson.

The best way to access how affiliates are doing is through social media.

“All of our affiliates post videos of themselves with their classes,” said Johnson.

Johnson said that what happens in the gym hasn’t changed dramatically because over the first six years, the Indianapolis coaches had seen hundreds of people and developed the program at all levels. They were confident that the program works.

What has changed, though, is that Indianapolis is now a home office that manages 356 affiliates. It has the responsibility for making sure instructors are trained properly, executing the program effectively and answering all their questions.

As an organization, it is still learning how important its brand is.

“When we very first started, we had questions like the guy in Australia who wanted to replace the Statue of Liberty in our logo with a kangaroo,” Johnson said.

“We’ve had to learn what it means to worry about branding and to trademark our logo and our bylines. We’ve got a couple – Fighting back against Parkinson’s, In this corner hope — are both trademarked taglines.

“We’ve had to safeguard that, and as we’re moving along, now we have manufacturers that want to put the Rock Steady logo on stuff, and so now we’re learning about royalties.

“We started out as a local nonprofit, hand-to-mouth, having barbecues, to pay the coach. There’s a lot more business end to what we do than there used to be.

What does the organization have planned?

Recently Rock Steady launched a free quarterly 32-page magazine, “In Your Corner.” It is one way to connect the affiliates, and make them aware that they are a part of something bigger – fighting Parkinson’s.

It is also developing an online certification program, which for the next year, it will be available only to affiliates.

But most importantly, it continues to stay focused on its mission.

“We are experts in Parkinson’s, you have to have a Parkinson’s diagnosis to be here, and so we just feel like that’s the strength of the program. We haven’t tried to develop any other programs for other diseases. This is what we do. There are 10 million people in the world with Parkinson’s. There are people everywhere with Parkinson’s that need this,” said Johnson.