The refrain is a familiar one, and young people hear it all the time: “Study hard, go to college, get a good job.” For many students, it’s great advice. In a competitive marketplace, a good education is vital.

Rodney Bussell, program director at YouthBuild Indy, is all for studying hard and getting a good job. But going to college? Bussell says it’s not for everyone.

“Somehow, somewhere, you need to get certified in something,” said Bussell, who has a background in youth work and has been in charge of YouthBuild Indy since 2015. “If you’re better at using your hands, let’s get you in an apprenticeship program. If you’re not that classroom person who will sit in the class for the next four or five years all day long and write papers, if that’s not you, it’s OK. It’s not a bad thing.”

At YouthBuild Indy, a nonprofit on the city’s Eastside near 25th Street and Keystone Avenue, low-income young people receive construction and trades training while working to earn a High School Equivalency Diploma. The program began in Harlem in New York City in 1978, and a decade later, its founder took it national. 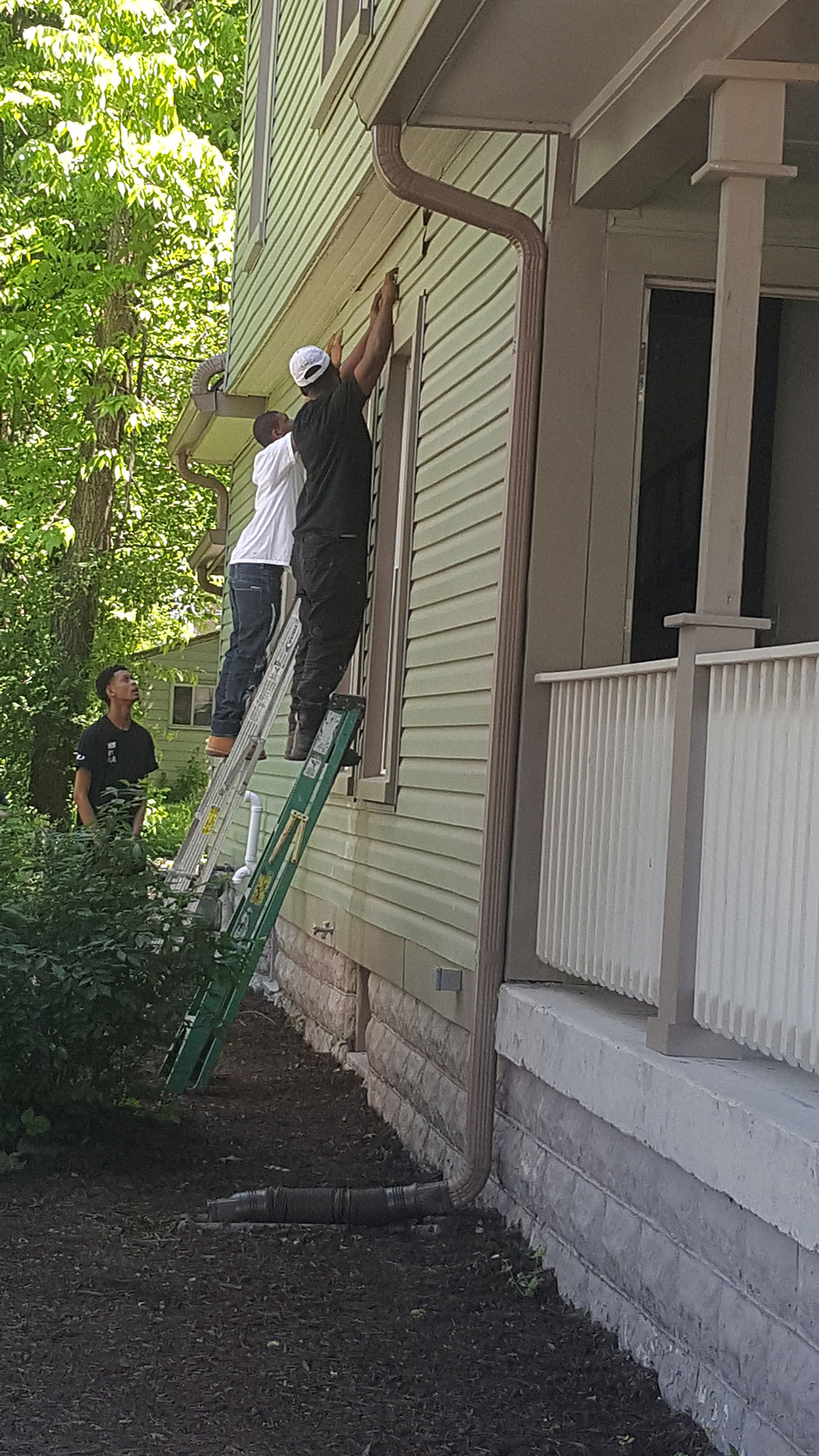 The Marion County program, around for eight years, is open to the county’s high school dropouts ages 18 to 24 who are drug-free. It is managed by EmployIndy, funded by the U.S. Department of Labor, and has had more than 350 young adults complete the program.

Chantell Ledezma, 22; Tyler Keno, 22; Britney Cooper, 25, are currently enrolled in the program, and Armani Edmond, 19, who finished in the spring, is now a staff member. These four enrolled to earn their equivalency diploma and construction training, but it has provided them with much more than that.

“Yes, it is about the education, but staff care about your feelings, too. That’s why I like coming here. It’s not just the money or the education, I just feel like they help with a lot,” said Keno, who has been with the program for three months.

For Cooper, the program is her chance to make a change and have a better life.

“My goals are to build myself, have a career and look into the future. We all motivate each other every day. It’s the place to come to,” she said. Cooper dropped out of school at 18 to take care of her daughter.

Bussell said the program provides stability and a sense of family for these young adults.

“You create trust for them. A lot of them don’t have a family structure that a lot of us may have grown up in. So a lot of times, we build trust, let them see that we’re there for them and they haven’t seen before. They’re kind of in that traumatic lifestyle.

YouthBuild Indy opened in 2008 at the John Hope Academy on 16th Street. It’s now on the third floor of 37 Place, a multigenerational community center in the Martindale-Brightwood neighborhood. Because of its location, the organization lacks some visibility. Potential students don’t just walk in the front door.

Part of Edmond’s job is to get the word out through social media, meetings with area school guidance counselors and billboards around the city. In the past, students found the program through fliers, the courts, referrals from other programs and word of mouth.

“We’ve been trying to pump it up because the numbers are kind of lower than we’d like them to be. We really are trying to market it. A lot of people are trying to figure out what we do or say, ‘I never heard of you,’” said Bussell. “We’ve had some decent foot traffic, we still would like to have more. Armani does a great job of getting out in the community, doing a lot of fairs and trying to make people aware of the program.”

On Bussell’s wish list is a different location that would include a carpentry shop with classrooms. Both city officials and other businesses have reached out to offer projects for students, and having an onsite shop would allow students to work on these projects with staff supervision.

The program targets Marion County students because of the county’s high poverty and dropout rates and emphasizes certain ZIP codes.

Potential students have to show proof of low income — food stamps, Medicaid or a check stub, if they are working. Staff expects that students are drug free, but they are not regularly tested.

Even if a student meets all the criteria, he or she must be interviewed and invited to a two-week mental toughness boot camp. During this time, the student is not enrolled in the program, but both the staff and students are charged with determining if the program is the right fit. Students under consideration must arrive at 8:30 every morning sharp, wear a white shirt and khakis, and only after completing the boot camp, are asked to make a commitment.

“It’s basically like tryouts for a sports team or anything like that. It’s basically seeing who wants it bad enough,” said Edmond. “After completing that two-week process, they will have a class graduation. Right after that, they’ll come back up, and we’ll have a meeting to see who made the cut, who wanted it bad enough and who will be accepted into the program.”

Edmond also works with students, talking and helping them through every day. “I’ve been through it, and just being that person they can relate to and give them tips and tell them to keep pushing forward up to their graduation point.”

Once enrolled, grant funds help provide students with gas cards or bus passes and a weekly attendance stipend. Students get $75 a week during an education week and $100 during a construction week.

Besides Bussell, the program has three case managers, a recruiter, three to four teachers and a construction manager. Troy Turner from Turner Construction teaches safety courses and manages the construction work and Marian University oversees the education portion.

Most students spend a week in the classroom and then rotate to a construction site or learn about basic Occupational Safety and Health Administration, engineering, electrical or construction certifications. Students also learn the expectations and responsibilities of the workplace through the JAG program, which also helps them work on resumes and take part in mock interviews.

With Turner’s guidance 73 percent of the students have completed their National Construction Certification, which is nationally recognized and issued by the National Center for Construction, Education and Research (NCCER). Often the construction work focuses on Indy’s abandoned houses. The Community Development Corporation purchases these homes and then contracts with Turner Construction, which guarantees that these will be training houses for YouthBuild.

Students just completed houses on Capitol and Graceland avenues and Oxford Street and now are working on Kenwood and Leland streets.

“Giving them NCCER, they have a basic fundamental foundation of what construction is, and it’s a good certification to have. Our students move ahead of the bunch. They come in to a job interview with a high school equivalency and NCCER. We have a young man who got a job right away. He said, ‘I got NCCER,’ and he walked out of a job fair with two jobs,” said Bussell.

Through partnerships with organizations such as IndyPendence Job Corps, Bussell is looking to grow the trade options to include CNA or IT training.

“We can expand on it, but the foundation is always going to be construction,” said Bussell.

“When young people graduate, we don’t just cut them lose. We have a year follow-up. We’ll make sure they have jobs, and if not, we’ll try to get them back to find one. We celebrate 30 days, 60 days, 90 days job-holding accomplishments.”

“I will contact some of my alumni and ask, ‘Are you working?’ If you are working and you are satisfied OK, if not, let’s get you in here,” Bussell said.

YouthBuild Indy places 68 percent of its participants in further education programs or employment and has an 81 percent diploma/certification rate.

Would Cooper, Keno, Ledezma and Edmond recommend the program to friends and family?

Ledezma says if they really want to go back to school, this is the place to be.

“If it was one of my friends, like my homeboys, I’d be like, ‘Bro, you trying to bury yourself. Like come up to the place where I’m at.’ This might be weird, but everyone wants the money, and I’d be like, ‘They pay you, too. Get you some money, get your education,’” said Keno.