Home
›Feature›Talking about trauma helps to overcome it 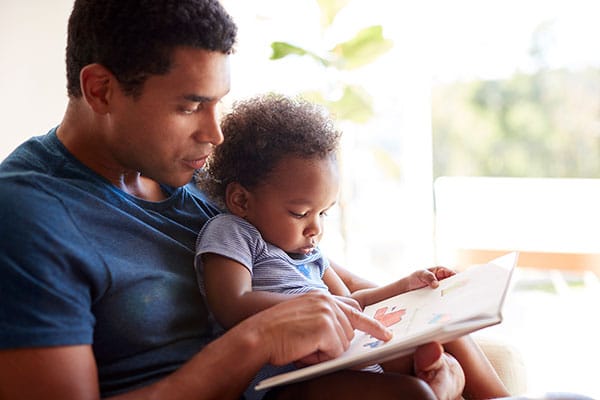 Consider the unexpected power of the spoken word.

So, when Fathers and Families Center married the two, it resulted in Story Telling, its program funded by the Robert Wood Johnson Foundation’s Forward Promise initiative.

The project is designed to guide young males of color through a process of self-discovery and reflection that can help them address trauma. These fathers have choices, and can tell their story through poetry, journals, letters, music, videography and other creative approaches.

When the program began two years ago, many fathers did not see the connection. It took staff members to create the bridge. Anthony Patterson, a program coordinator, had his own story. By telling his, he shared the power and helped dads make a connection.

According to grants manager Anna Melodia, his efforts springboarded the program. Many decided to open up and tell their stories. Facing their trauma, they discovered more options in life, and inspired others through their art.

Since early 2018, these creative workshop sessions have been taught by Stephinie Johnson, a poet and counselor who is a contract consultant. Later, she wrangled her husband, Milton Johnson, a music composer and producer, to join the effort.

Participants start with Terrence Harper, the center’s health and wellness manager. Before the Robert Wood Johnson grant, Harper was practicing cognitive behavioral therapy or psychotherapy, but through this initiative has developed a hybrid of narrative and narrative exposure therapy.

With a focus on historic and systemic trauma on boys and young men of color, ages 16 to 24, the center’s program was designed to buffer the effects.

“What we found is these men weren’t necessarily in the heat of that trauma, so I had to do some adjustments where I did a hybrid between narrative therapy and narrative exposure therapy.”

Harper uses several survey instruments, like Life Events Checklist, to identify and hone in on specific trauma. Through the survey, he’s found that the majority have experienced things like family dysfunction, abandonment of fathers, lack of education and judicial trauma.

“I do a lot of person-centered therapy with them and individual therapy by way of the arts to further express that narrative in art form — painting, the music studio or poetry. What’s interesting is a common theme that continues to emerge is resiliency and perseverance,” said Harper.

“Some of them have actually disconnected from it. It was traumatic at the time, but as far as the ongoing and lingering effects, I think that a lot of time they don’t realize how it is still hindering them and holding them back because they’ve moved on. But they’ve moved on in a mode of survival. ‘Yeah, it happened but I just need to keep it moving.’”

Initially the men and boys talk about their childhood to illustrate some of the challenges they have faced, and Harper tapes the sessions to pinpoint specific traumas that are still barriers. By the time they return for the second session, he reviews the stories with the individuals.

“And so by telling their story and helping them to slow down, there is a form of healing that begins to take place. Unfortunately, though, because of the transient nature of our population, generally I’ll keep them about three to four sessions. We’re just hitting the tip of the iceberg. But hopefully as a result of that, they’ll want to continue on even after their narrative is completed,” said Harper.

“This is not necessarily about adverse childhood experiences, this is about adverse experiences that have historically manifested as trauma. Everyone who comes in doesn’t necessarily tell a story because they may not be ready. So, I have to use discretion on whether or not they’re ready versus moving them on. Maybe they don’t tell their story in this way, but maybe they are ready to share and express it through art or through music.”

Along with counseling work, the creative sessions with the Johnsons help put experiences in context and into words. The fathers acquire new skills and develop confidence to craft and share their stories.

“I think that it works very well because a lot of the youth when they work with me, they’re able to break down barriers that they didn’t even realize they had. They’re able to open up, they’re able to express themselves and have something tangible. I think it has a tremendous effect on the youth that we work with,” said Stephinie Johnson who has a counseling background.

Milton Johnson grew up in Virginia and understands these young fathers. He and Stephinie were in the Army stationed at Camp Atterbury, and after leaving the service, decided to put down roots in Indiana.

“I grew up kind of how they grew up. My goal has always been to go back to the same type of neighborhoods and communities that I grew up in and show that you don’t have to be a product of the environment, you can be different,” said the music composer and producer.

Music, he believes, is therapeutic.

“What happens with a musical connection is that we build a relationship that allows them to build trust and they share things that they wouldn’t normally share with an instructor. We’re able to dig deep, and as they talk and relive some of the things they’ve gone through, they kind of see where they might have messed up and it gives them more of a motivation to fix the things that were broken in the past,” he said.

This rap was written and produced by a participant in Milton Johnson’s music storytelling sessions.

Harper believes that once fathers come into the program, and see the authenticity of the staff, it helps them lower their inhibitions and guard.

In the end, it is the hope that each client produces a retelling of his story.

“And the hope is at some point, they’ll be able to pass it on to their children and let their children know, here’s where dad started, he’s what he went through and the challenges, and this is him as he’s emerging and received his own healing.”