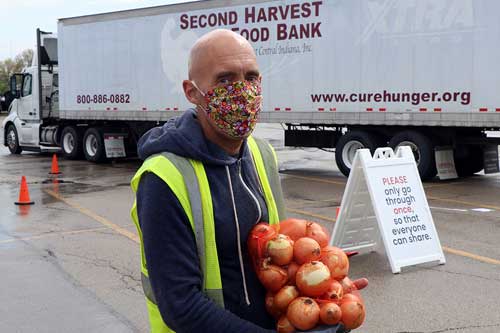 By charitableadvisorsJune 8, 2020Feature, Programming
No Comments

By sheer numbers, very little good has come as a result of the coronavirus pandemic. In the U.S., there have been more than 2 million cases, more than 110,000 lives lost, nearly 40 million people unemployed and no clear signs that better times are close.

But for two Indiana nonprofits — Carey Services and Second Harvest Food Bank of East Indiana — the pandemic has forced them to rethink their operations. For the leaders of both organizations, resilience is a key word in their vocabularies.

And maybe … just maybe, they will be stronger when life resumes as normal.

Muncie-based Second Harvest Food Bank of East Central Indiana is a hunger-relief organization started in 1983 that provides food through a network of 96 agencies and 35 schools in eight counties.

Tim Kean has been its CEO/president since 2012. During the pandemic, he said the agency is finding new ways to reach people.

“I think when circumstances present themselves, you can push back and try to resist,” said Kean. “But if you have the perspective of leaning into the circumstance and using that force that you’re feeling in your favor, then I think you can leverage a lot of benefit (for) the people that you’re trying to serve.

“(Second Harvest) has moved to the place where we are leaning into this and looking at it on some level as being transformational.”

So, what has changed and how has the organization adapted?

Its food supply has been interrupted. Consequently, with donations not coming from its traditional sources, it has had to find alternative ways to procure food said Kean. As a Feeding America network member, it has leveraged national food opportunities, but the bottom line is it has had to purchase food in the marketplace to give it away.

With the high demand, food banks have been forced to quickly ramp up their efforts. In Indiana, news reports have depicted long car lines waiting for mobile food distributions. And while Second Harvest has used this delivery method for over 20 years, what is new is the volume. Nearly double, for each distribution it now uses two loaded semis and serves 2,000 to 3,000 families, up from 800 to 1,000 a year ago. During June, 32 mobile distributions are scheduled.

Volunteers have been a mainstay for the nonprofit, and in a typical year, it relies on 4,300 volunteers to assist with food distribution. But in March, the organization sought to eliminate risk and curtailed access to the warehouse and headquarters, forcing it to find alternative ways to distribute food.

Local organizations have helped fill the gap. Now, rented cargo vans loaded with food are picked up by community groups and driven to underserved areas for pop-up pantries. In the first six weeks of the pandemic, 15,000 pounds of food helped 750 families. In addition to food, diapers, an often-overlooked item, are part of this weekly distribution.

Activated citizen soldiers have been part of its new crew. When the governor activated the National Guard, Second Harvest Food Bank was assigned 30 men and women from a Brigade Support Battalion (BSB). Kean said they are assigned only until June 24 if funding is not approved to extend deployment. If not, Plan B is in place – to hire temporary workers to continue the activity at the current level.

“Quite honestly, I don’t anticipate the need diminishing during that time period. So, we’ve got to figure out how to get that done,” said Kean. “

“We’re not doing it, the community’s doing it. We’re finding that there are new opportunities. So, it’s that kind of thing that I think lends itself toward stepping into the change and embracing it and figuring out how you can become something bigger and stronger than you were in the past and more effective. It’s not just about being bigger, but it’s about being more effective,” said Kean.

Kean noted that there are internal changes as well.

“We are transforming our organization internally in our staff structure, in areas of emphasis. We’ve been hiring people, and we’re going to continue to hire people. We’ve been acquiring new equipment because we’re in a different place.

“I don’t see us looking in the rear-view mirror saying, ‘I hope we can get back to where we were some point soon.’ That is over. We’re at a new place and we’re embracing that, and we’re looking at ways we continue to facilitate growth.”

“I am not at all driven down by the circumstance, if anything I’m energized because this has given us an opportunity to go and find some diamonds. You have to push a lot of things out of the way to get those diamonds, and we’re willing to do that.”

Marion-based Carey Services has served people with disabilities since 1954 with the mission of helping people “turn abilities and barriers into opportunities.” Since 2013, Jim Allbaugh has been its CEO/president. During the pandemic, he said he’s been constantly reminded that the answers to challenges were close.

“It’s almost always members of our team, our staff, our families and the people who we serve who are the ones that have the right answers. So (it’s important to) listen, understand and get perspectives,” he said.

“As we came into the pandemic, there was a clear recognition, and it became more evident during this pandemic that we are individually focused on the people that we serve, and on our employees. So what we realized more and more each day was that need to be aware of what each individual that we serve and each employee would require of us during this pandemic,” said Allbaugh.

Among the agency’s services are group homes, an early Head Start program, workforce development and day services. Over the past five years, the agency has worked to integrate its clients into the community.

Roughly, 61 million Americans are living with a disability of some kind, according to the Centers for Disease Control and Prevention (CDC). While the vast numbers are able to live at home, some live in residential placement. That is the case for 90 adults who live in Carey’s group homes that provide 24-hour supervision for six to eight people.

Allbaugh credits staff creativity for helping clients continue to make positive progress during the pandemic. Residents have struggled with understanding why their routines were being disrupted, and why going out in the community was curtailed, and why people are wearing masks.

“If you can imagine, people with intellectual development disabilities sometimes struggle to even say, ‘Why are you wearing this mask? I cannot see your lips, it just doesn’t make sense to me why you’re doing that,’” he said.

As they readied to reopen the main campus, one question drove their efforts: “How can we get back to whatever the new normal is to continue to maximize that level of independence for the folks that we serve? That’s kind of been the path or really the journey, if you will.”

On June 1, the facility reopened some of its services, and Allbaugh said his staff was pleased with the outcome.

“It is so great to see people engaging and turning abilities into opportunities back at our main campus. We look forward to next steps with our Phase II and Phase III, and in July, our Early Head Start classroom reopening,” he said.

During the pandemic employees in different departments advocated for alternative ways to deliver services to continue progress. When the agency furloughed the Employment Services team, Allbaugh said an employee challenged that decision. He presented a case for reinstating the team, using Zoom and other technologies to engage participants.

Allbaugh said his employee made a persuasive argument. “‘He said, ‘Jim, we’ve made too much progress with these high school-aged special needs kids who need to keep the momentum moving on their career goals. You need to let us come back and get back to work and do these things from a technology base.’

“The positive results from that effort are great. They’ve kept in contact, kept engaged, kept learning and growing,”Allbaugh said.

And while, staff were already investigating these methods, the pandemic jump started them. And Indiana officials have been open to learning what kind of alternative-service delivery is possible.

“One of our goals is figuring out how to tell the story to those that fund us in such a way to say, ‘You know we cannot go back. Here’s the success and certainly the data is proof.’ We’ve got to be able to figure out how to be allowed to continue to provide this kind of support,” Allbaugh said.

The internet has also helped in other ways. In 2016, the nonprofit started an arts program, Creative Hearts Art Studio. Besides individual expression and discovery, the project was also about integrating clients into the community. During the pandemic, however, that effort was thwarted, limiting the community’s access to the shop. So, plans to open an online store became a priority.

“Knowing that everybody was now on their computers and living virtual lives, our team got together and said ‘Now is the time. We’ve got to push this out because people are on their computers right now.’ This is another opportunity to tell our story in a world where folks are living in that online environment,” said Allbaugh.

Allbaugh said from the beginning of shelter-in-place, rather than wallowing in the challenges of the daily stresses, staff began planning for the “new normal.”

“Our team has not permitted that kind of culture to be here.”

A funder commented on the agency’s forward thinking, sharing feedback on an agency proposal that asked for dollars for plexiglass, duct tape and portal hand-sanitizing machines.

“On the surface those things are all kind of simplistic, but the thing the funder appreciated about those three simple tools is the sustainable nature of those items. Those are things that our team thought about that will be something that we may be using for years.

“We need to realize that we’re still in a situation where we still have the same virus, with the same risk, and what this last period has allowed us to do is build and learn and put together a toolbox of safe and health practices and build a sustainable behavior of our employees and the people that we serve,” said Allbaugh.