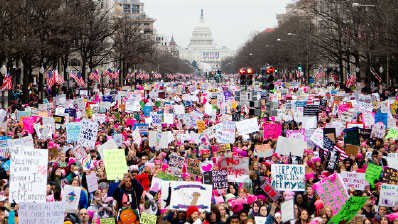 By charitableadvisorsDecember 14, 2020Feature
No Comments

Study also shows that charitable giving for these organizations reached $7.1 billion but represents less than 2% of total giving

by Shari Finnell, editor, Not for Profit News

When more than 3 million people around the globe gathered on Jan. 21, 2017, in support of the Women’s March on Washington, it was designated among the largest one-day social movement protests in history. Several months later, the #MeToo hashtag movement ignited a campaign that gave women a voice on issues related to sexual violence and harassment.

Those events not only raised awareness on women’s rights, they seemed to contribute to an increase (85.2%) in charitable giving to organizations that support women’s reproductive rights during a five-year period, from 2012 to 2017. Those were among the findings of The Women & Girls (WGI) Index 2020 report, recently released by the Women’s Philanthropy Institute at the IU Lilly Family School of Philanthropy at IUPUI.

“For a long time, the work at the Women’s Philanthropy Institute has been focused more on the donor side of the equation,” said Tessa Skidmore, a Women’s Philanthropy Institute visiting research associate who led the study. “We have examined the unique characteristics of women’s philanthropy. With this research, we focused on women and girls as the recipients of charitable giving. There have been studies that have examined the percentage of giving for religion, education and the arts, but not the dollar amount of giving to organizations that are dedicated to primarily serving women and girls.”

Skidmore said that organizations that met the criteria of the study included those in which 80 percent of program expenses were allocated to programs for women and girls, such as Girls Inc., Planned Parenthood, women’s auxiliary organizations, and women’s philanthropic organizations, including the Junior League. Nearly 47,000 organizations met that criteria for the 5-year period of the study.

The research, which was funded by a grant from the Bill & Melinda Gates Foundation, represents the first multi-year look at how giving to women’s and girls’ organizations has changed in recent years, according to the institute. The giving measured donations from individuals, foundations and corporations from 2012 to 2017, which grew by 36.4% — similar to other charitable organizations during that time period.

Although the report revealed an overall increase in charitable giving for women’s and girls’ causes in the United States — up to $7.1 billion by 2017, it also noted that it remained at 1.6% of total giving.

“While women’s and girls’ organizations saw steady growth in philanthropic support from 2012 to 2017, contributions to these organizations continue to comprise a relatively small share of overall charitable giving,” said Debra Mesch, Ph.D., professor of Philanthropic Studies and Eileen Lamb O’Gara Chair in Women’s Philanthropy at the Indiana University Lilly Family School of Philanthropy. “For any organization or donor invested in women and girls, the WGI provides powerful empirical data and stories of growth and challenges that can help the sector work collectively to address gaps in funding.”

According to Skidmore, the report also revealed the impact that government funding has had on organizations that primarily focus on women’s and girls’ causes.

With the collection of more data in 2018 and ensuing years, the WGI Index report may continue to show correlations between movements that raise awareness and, as a result, lead to an uptick in giving in certain categories, Skidmore said. “In future years, we may begin to see the impact from the pandemic and racial justice protests.”

Jeannie Sager, director of the Women’s Philanthropy Institute, also noted that the research could be used by advocates to support future initiatives.

“The COVID-19 pandemic has disproportionately affected women and particularly women of color. In light of this, women’s and girls’ causes —particularly those addressing the intersection of race, gender and other areas of inequality — will need more resources,” Sager said. “The WGI’s insights can kick start discussion and action to generate philanthropic support for these critical organizations,”

Other key findings of the report include:

● Growth in philanthropic support for women’s and girls’ organizations was especially strong in 2017 (9.4%).

● Although the composition of women’s and girls’ organizations based on nonprofit subsector and mission focus largely held steady in 2017, organizations dedicated to general and reproductive health received an increased share of philanthropic support.

The full report and visual summary are available here.