By charitableadvisorsOctober 27, 2015Feature, Fundraising
No Comments

Bob Karnak isn’t the type to back down from a challenge or a chance to get in a little exercise. The retired quality assurance consultant at Elanco recently made a trip from Indianapolis to Cleveland to visit family. For some, that would mean flying; for most, it would be a five-hour car trip. For Karnak, it was just an extra-long bicycle ride. 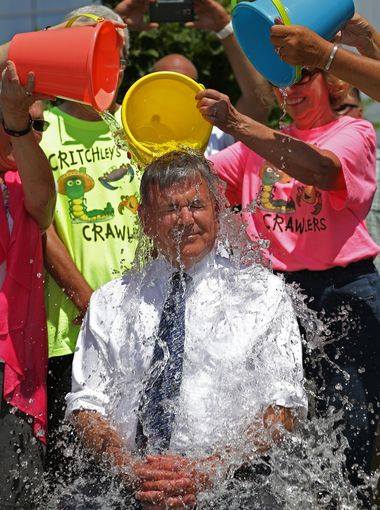 The 68-year-old Indianapolis man doesn’t make a habit out of going out for 300-mile spins, but it is in his fabric to stay active. Karnak averages about 3,000 miles a year on his bike, mostly for pleasure, but there’s often a deeper, more important goal.

Karnak’s two-wheeler isn’t just a vehicle to get from Point A to Point B. It’s a vehicle to raise money for charity – for causes that are important to him. Causes that can make the world a better place.

“Is altruism the right word?” Karnak asked. “It’s really doing something for somebody else. I’m healthy, my kids are healthy, my wife for the most part is healthy. I don’t have any life threatening diseases. I think it’s incumbent upon those who are healthy to help others.”

In many respects, Karnak, and others like him, are a charities’ best friends. They do the heavy lifting. They ask and the charity receives. In the nonprofit world, it’s called peer-to-peer fundraising, and while the concept has always been around in one form or another, it has grown to new heights over the past decade.

Over the years, Karnak has raised money locally through various biking events for charities such as Habitat for Humanity, the Multiple Sclerosis Society, the Juvenile Diabetes Research Foundation (JDRF) and most recently, the Leukemia and Lymphoma Society. The total is north of $160,000 and still rising.

Ways to get up, get involved

Looking for an event to participate in to raise money for a charity dear to you? There are many opportunities in Indiana, in the Midwest and nationally.

Most organizations have already held their 2015 events, but will be setting dates soon for 2016.

COLON CANCER
Get Your Rear in Gear 5K
www.coloncancercoalition.org

“If I’m out on a training ride, and somebody says, ‘Hey, what are you doing?’ and I get a chance to talk to them for more than five minutes, they are probably gonna get a letter from me asking for a donation,” Karnak said. “If you can bend someone’s ear, you’ll find everybody has a connection. Everybody. There’s not one person on this green earth anymore that doesn’t know someone who’s afflicted with something.”

Nonprofits rely on contributions to stay afloat, and under the peer-to-peer philosophy, rely on their supporters to play major roles. Who hasn’t been asked by your neighborhood Girl Scout or their parent to buy cookies? Or candy bars, wrapping paper, or poinsettias? We buy these things because someone we know asked us.

In today’s world, nonprofits that ignore the power of peer-to-peer fundraising do so at their own risk.

“It’s actually very simple in its core,” said Taylor Shanklin, the director of marketing and “peer-to-peer boss lady” at raisemore.com, a fundraising consulting firm in the Dallas-Fort Worth area. “It’s just people asking people to support them in what they are doing and support a cause they care about.”

In most cases, peer-to-peer fundraising revolves around an event: a run, a walk, a bike ride, a triathlon, a swim-a-thon. Participants sign up, agree to raise money and ask their friends and family to donate.

The Indiana chapter of the Leukemia and Lymphoma Society receives 88 percent of its funding through events such as its Man and Woman of the Year programs, its Light the Night walk and Team in Training, said Executive Director Amy Kwas. The challenging TNT program, where participants are trained to run marathons, compete in triathlons or 100-mile bike rides, was among the pioneers in this respect, having started in 1988.

“There’s the old adage – that people give to people, and that’s why it works in our case,” said Kwas. “Most people are affected directly, and it’s a way of showing support, perhaps for someone who’s going through treatment.”

Today, just about every nonprofit has gotten into the act. If you have a favorite charity, chances are there’s a specific event lined up to raise money for it. The figures may vary slightly, but there’s no doubt that the response rate from one donor asking another far exceeds that of traditional email or snail-mail solicitations from the charity itself.

Kimbia, a Texas-based fundraising consulting firm, estimates that 1 in 4 peer-to-peer emails will result in a donation, as compared to 1 in 1,250 appeals directly from a charity.

“In peer-to-peer, it’s a friend asking a friend,” said Shanklin. “I’m more inclined to give to my friend than some random organization. Peer-to-peer is always going to win in terms of (return on investment).”

Despite its effectiveness, not all charities have jumped on the bandwagon with both feet. In Indianapolis, Gleaners, which operates multiple local food banks, sends out solicitations frequently and still gets the majority – as much as 60 percent – of its donations from individuals. The charity has a donor database of more than 60,000, said Debbie Russell, the director of donor engagement.

“We’ve talked about it, but we’re not doing a lot in that regard,” said Russell, of peer-to-peer.

Gleaners did have a recent golf outing, however, that raised $7,500, and is putting in place a Building Hope initiative that is moving in the peer-to-peer direction, Russell said.

Gleaners is looking for key donors to become “ambassadors.” Russell said the ambassadors will spread the Gleaners’ message and bring others into the circle with the hope of creating a steady revenue stream.

For those charities wanting to enter the peer-to-peer world, there are no shortage of advisers. A simple Google search turns up page after page of companies marketing their services. Fundraising professionals can attend national conferences on the subject and there are numerous blogs devoted to the topic, mostly focused on the power of social media.

There are some red flags, however. According to the Peer-to-Peer Professional Forum, the top 30 peer-to-peer fundraising events in the country raised more than $1.6 billion in 2014, but that is a 2.47 percent decline from the previous year. The biggest player, the American Cancer Society’s ubiquitous Relay for Life program, brought in $335 million, but was down nearly 12 percent, or $45 million from 2013. The traditional Susan B. Komen Race for the Cure was down 10.78 percent, and its sister event, the Komen 3-Day walk, was down 38 percent or about $16 million.

Other events, such as LLS’ Team in Training program and the JDRF One Walk also took major hits.

Shanklin, of raisemore.com, thinks part of the decline is because the market is simply overcrowded.

“There are so many events now. Sometimes I feel that everybody is doing a walk,” Shanklin said. “I think that donors and participants are looking for something more interesting. Quite frankly, walks don’t bring in a lot of money, and they can be kind of boring. Although the walk thing is something everybody can do.”

Shanklin says charities must be more innovative, and many are, she said.

“Some organizations are trying different things, like animal shelters doing a dog walk,” she said.

The Alzheimer’s Association, which has a traditional walk that raised nearly $68 million across the country last year, has branched out with an event called the Longest Day. The initiative is on June 21, the summer solstice. On that day, participants pick an activity to take part in from sunrise to sunset, a reminder of the daily challenge facing those with Alzheimer’s.

“One of my friends had a daylong karaoke party,” Shanklin said. “They are doing a lot of do-it-yourself campaigns.”

Another popular event is the Movember movement where men grow mustaches in November and raise awareness (and money) for prostate cancer research.

“Movember is something that’s new. It’s fun, it’s quirky, it’s interesting. I think people are shifting their giving around because there are so many options out there,” Shanklin said.

The target for most charities is to catch lightning in a bottle similar to the ALS Ice Bucket Challenge that swept the nation a year ago. The ALS Association, which works to fight Lou Gehrig’s Disease, raised $115 million in 2014 after donations of just $23 million in 2013. In contrast, the movement has brought in barely a half million dollars in 2015.

“The Ice Bucket Challenge took off in the peer-to-peer world like nothing else,” Shanklin said. “I don’t know if we’ll ever see something like that again. It wasn’t even a fundraising campaign, just a way to raise awareness, but people got involved and interested, and it became a fun thing.”

“We broke the glass ceiling when it comes to awareness,” said Cindy Wise, executive director of the Indiana chapter of the ALS Associated. “Now if I mention “Ice Bucket Challenge,” everybody knows what I’m talking about.”

Shanklin doesn’t believe traditional fundraising is dead, but charities that continue to send out solicitations must be mindful of their audiences. While older donors may still like letters, younger people may prefer emails or to be contacted strictly through social media.

“Knowing the analytics of your audience is really important, and that’s something charities can really, really mess up,” Shanklin said. “When I feel they aren’t listening, and they bombard me – like if they send something to my 4-year-old son and me – I’m thinking, ‘If you are misusing your resources, I actually don’t want to give you my money. I might want to give it to someone else.’

“I want to see organizations do a better job of tailoring their communications,” Shanklin continued. “Nonprofits must look at generations and generational-giving trends and reports and how they are connecting to those generations.”

Knowing your audience carries over to the peer-to-peer world. Much attention has been focused on the innovative fundraising techniques of Charity: Water, which provides wells and drinking water for Third World countries. The 8-year-old nonprofit has become overwhelmingly popular with millennials and has drawn raves for its videos, vivid graphics, compelling stories, its social media presence and its revenue model in which 100 percent of all donations go to its programming. Charity: Water’s operating costs are paid for privately.

Charity: Water’s September campaign asked that people born in that month forgo any birthday gifts and ask friends to donate to the charity instead.

Even Charity: Water’s approach, however, goes back to the core of peer-to-peer fundraising. Friends asking friends. Neighbors asking neighbors.

Karnak, the bicycle veteran who has been raising funds this way for more than two decades, is a believer.

“I think a lot of people give because I’m coming out with a request and a valid reason,” he said. “And I make a case for it. I’m not doing it for myself. People are willing to give if you ask.”