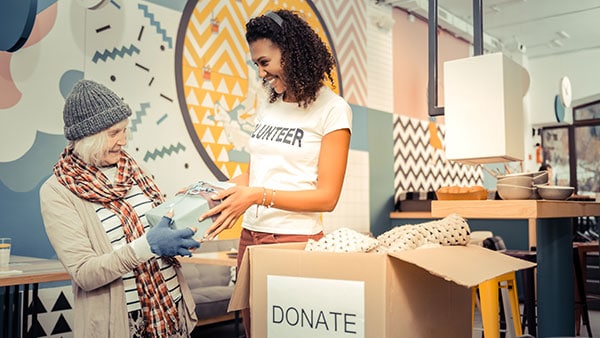 How do women give of their time, talent, treasure and testimony?

By Abby Rolland, communications project manager at the Lilly Family School of Philanthropy

For more than a decade, the Women’s Philanthropy Institute (WPI) has conducted research to answer this question. Known for its studies that specifically focus on gender and giving, the institute doesn’t just report on the findings, but incorporates practical perspectives and applications in every study it conducts.

When Jeannie Sager joined WPI as director early this year, she was especially drawn to WPI’s mission to curate and disseminate research.

“Sager will be a dynamic new director guiding the next phase of our Women’s Philanthropy Institute, which is helping to understand the full potential of women in philanthropy and the potential of women’s philanthropy to transform the world,” said Amir Pasic, Ph.D., the Eugene R. Tempel Dean of the school. “Her experience working with women philanthropists as donors and volunteers will further inform the institute’s work, and her strategic, creative leadership style will help launch a new decade of excellence for WPI.”

An established leader in philanthropy and fundraising, Sager brings a wealth of expertise and more than 25 years of nonprofit leadership and development experience in a variety of fields, including higher education, independent schools and healthcare.

At the Indiana University Health Foundation, she was part of the leadership team that created a flagship statewide foundation from several disparate hospital foundations that collectively exceeded its first-year fundraising goal by more than 330%.

Sager also built a full-scale development program from the ground up at University High School of Indiana, raising over $30 million in private philanthropic support by establishing a major gifts program focused on annual gifts.

She believes nonprofits must form deeper relationships with donors by creating community, establishing personal connections with potential donors, encouraging longevity and donor education and inspiring deeper engagement. Nonprofit practitioners, she said, should incorporate easy-to-understand research findings into their daily work as they help donors — women and men — discover their passions and reasons for giving.

She recently shared two donor anecdotes from her firsthand experiences that illustrate how WPI research can be embedded into practitioners’ daily experiences and help inform donor strategy.

“I worked with a woman on her first ever “major” gift. It was the largest personal gift that she ever made. She was inspired to make this gift as an opportunity to give back to her department in honor of two physicians whom she felt invested in her at the beginning of her career. So, she wanted to create a staff education fund to help other team members have the opportunity for professional development to hopefully inspire them to choose that area of healthcare as their specialty.

“She was very adamant about the idea of an endowment and having these funds available in perpetuity and not subject to budget constraints. Moreover, she was resolute about finding others to match her gift and to achieve a goal of $100,000. She was willing to personally solicit her network of colleagues, both retired and current employees, her family and grateful patients.”

APPLICATION: Consider the various ways that women donors engage with each other in giving.

According to the report “Where Do Men and Women Give?” female-deciding households are more likely to give to health (like the woman above), youth and family, and international causes. In couples when the wife is the sole decision-maker, the household is more likely to be motivated to give by believing that their gift will make a difference.

“When working in the independent school space, we often engaged in discussions with spouses or adult children about considering a gift to the school that honored and equaled the time and talent that their spouse or mother had invested in the school — imagine hundreds of hours serving as PTO president, working open houses, organizing fundraisers and working concession stands, etc.

“Reframing their spouse’s or mother’s time in terms of value helped elevate a major gift conversation.

“Women philanthropists tend to give more than money. In addition to being more likely to donate than men, they also are more likely to volunteer — and volunteer more hours on average — compared to men. In other words, women give of their time and talent, for example as PTO presidents, board members, and fundraising committee members, in addition to giving their treasure.”

APPLICATION: When approaching a woman donor or those close to her, consider the time, talent, treasure, and testimony she has given your organization.

Women’s monetary donations are important, but keep in mind the many other ways women show their generosity. They volunteer, and they use their networks and their voices to galvanize further support for causes they care about. In an estimate of informal giving over the last 10 years, 72% of Americans said they helped a stranger, and 42% said that they volunteered. Women are also more likely to volunteer than men. As a result, there’s large potential to engage potential donors, including the woman herself as well as her family members, by illustrating the impact that she’s had on the organization.

The bottom-line is as development professionals, think about the last few times that you interacted with women donors. If you can’t think of those interactions, why not? If you’re speaking to only men donors, who or where are the women in their lives that might be involved in those giving decisions? Why are they important to include? Take the time to analyze and evaluate your donor solicitations, and think of how including women will help your fundraising grow.

Abby Rolland serves as the communications project manager at the Lilly Family School of Philanthropy, and is also working towards a master’s degree in philanthropic studies. She holds a bachelor’s degree in history from Gettysburg College.