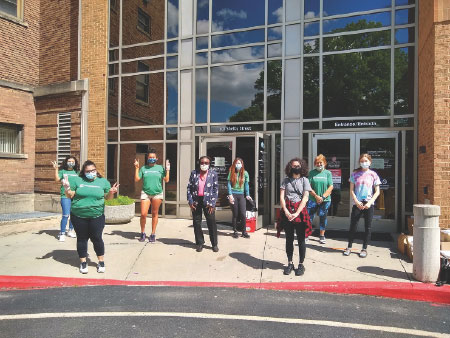 By charitableadvisorsAugust 10, 2020Feature
No Comments

Nonprofit organizations on the frontlines of supporting immigrants, refugees and other foreign-born residents have been regularly encountering challenges to ensure critical, sometimes life-saving, information is adequately relayed during the COVID-19 pandemic.

In addition to language barriers, these individuals are more likely to be employed in jobs that put them at higher risk for infection, are denied unemployment benefits, lack health insurance, and have fears about accessing medical care and resources — all factors that jeopardize their ability to navigate the pandemic, according to several local nonprofit organizations.

“Those of us who are fluent in English are struggling everyday to understand COVID-19,” said Dana Harrison, interim executive director of the Immigrant Welcome Center. “‘What did the governor say? What is going on with schools?’ It’s changing daily.” For foreign-born newcomers, those COVID-19 directives — from stay-at-home orders to how to protect themselves from the virus — can be extremely difficult to understand, Harrison said.

Rethinking the ceiling for grantmaking in a time of crisis

During the past 18 years, board members of The Clowes Fund have been invested in understanding the challenges facing immigrants and refugees as they shifted their focus to supporting those populations and workforce development initiatives.

When the pandemic hit the U.S., a subcommittee of Fund board members and staff immediately gathered to determine how it could best meet needs in the community. Realizing they didn’t have the resources of larger foundations, The Fund was intent on making a significant impact through a more concentrated effort.

“We used to be one of the largest foundations in Indianapolis,” said Elizabeth A. Casselman, executive director of The Clowes Fund, Inc. “That’s no longer the case. We work hard to find our lane. We were looking to find the gaps and then identifying the organizations that were working to fill those gaps.” The result was a plan to distribute unsolicited funds to current grantees, allow for more flexibility with an unrestricted grant format, and focus on program areas with the highest needs, including immigrant services and workforce development.

Just a few weeks later, the Fund awarded 21 small emergency grants totaling $220,000 to numerous organizations, including Gleaners Food Bank of Indiana, the Undocumented Hoosiers Fund of the Indiana Undocumented Youth Alliance, administered by Broadway United Methodist Church, and other organizations that serve populations who may not be eligible for other types of relief funding.

The unexpected grants came as a welcome surprise for many of the organizations that received them — giving them the support to continue their mission in the midst of an uncertain and turbulent period.

However, the extent of the damage caused by the pandemic weighed heavily on the board members, who started questioning if they had done enough, Casselman said. “There was a strong sentiment among Clowes family members and non-family members that it does no good to sit on these assets when there’s such a great need. We were worried we would look back and say we took too safe of a position.”

They were already familiar with the math that guided decisions throughout the foundation’s 68-year history — across four generations of the Clowes family. “With a foundation, the only legal requirement is that we must distribute at least 5 percent each year,” said Casselman, referring to the value of net investment assets. “Yet, all too often it begins to be interpreted as the ceiling rather than the floor.”

From a strictly financial standpoint, a conservative approach — the 5 percent floor/ceiling — also would have been the most responsible decision for ensuring that the foundation exists into perpetuity, continuing to support the intent of the founders’ mission, Casselman said.

“If you have several years of 6 to 7 percent, you can pretty quickly erode your funds,” Casselman added. “We realized those policies served us well in the long run. But these are exceptional times. And exceptional times demand an exception response.”

“Failure to respond in an exceptional manner would likely cause the Fund board and staff to look back with regret,” said Edith Bowles, Clowes Fund vice president. Bowles said they believed it is possible to make an unprecedented decision without damaging the long-term fiscal health of the foundation.

As with its previous response, the Fund quickly distributed unsolicited and unrestricted grants in July — in amounts ranging from $50,000 to Exodus Refugee Immigration, Inc., to $150,000 to Local Initiatives Support Corporation (LISC) for a comprehensive set of loans for minority-owned businesses. Median grant size was $40,000, significantly higher than Clowes Fund grants awarded in previous years.

Harrison of the Immigrant Welcome Center, as well as those of other organizations supporting the immigrant, foreign-born and refugee population of Indiana, were immediately met with challenges in the midst of the pandemic. “The challenges were always there … language barriers, higher risks of infection, an inability to qualify for government resources, lack of health insurance,” Harrison said. “They intensified with the pandemic.”

Every day, the Center intervenes on behalf of immigrants, ensuring that they’re getting access to food pantries, and unemployment benefits, rental assistance and healthcare they’re entitled to but are afraid to access.

Language barriers are especially problematic in a state with inadequate language translation options.

Immigration status concerns also instill fear among individuals who are undocumented, Harrison said. With the public charge rule, there is also widespread concern that applying for social benefits could jeopardize any chance of being granted legal permanent resident status, Harrison pointed out. “It’s been very successful in putting absolute terror in our immigrant population,” she said.

The Clowes Fund grant, along with other grants from other foundations, came at a critical time, Harrison said.

“The size of the grant we received from the Clowes Fund gave us some critical breathing room — the freedom to keep on some temporary staff members on a more permanent basis. We did not have to operate in financial fear,” Harrison said. “We were absolutely stunned. It helped transform our year.

“If we had not received that money there would have been the prospect of very hard decisions on the horizon, including reducing positions to part time,” she added.

Cole Varga, executive director of Exodus Refugee Immigration, Inc., said the organization has been focused on meeting the needs of refugees who have been displaced from nations like Syria, Burma, and Yemen under troubling circumstances made even more challenging because of the pandemic. In addition to helping refugees get settled in apartments, schools and jobs, the organization regularly helps them understand basic living skills, such as writing a check, purchasing groceries and accessing health care and social services.

As the impact of COVID-19 intensified, the Exodus team ramped up their efforts to assist refugees in applying for unemployment, and rental and utility assistance. Those efforts were complicated because of language barriers, said Varga, noting that Exodus provided interpretation. “Different government agencies are a bit behind with equality in terms of language access,” he said.

“Unemployment in Indiana has a massive backlog, making it even more difficult to navigate if you don’t speak English,” Varga added. “Some of them didn’t even have WiFi. It would have been impossible if we had not helped them out.”

Because of the added complications of applying for benefits as a non-English speaking resident, unemployment benefits sometimes didn’t arrive for more than two months. As a result, some families were unable to buy food or pay rent and utilities during that time, Varga said.

Grants have helped refugees face difficult circumstances, especially during the period in which Congress has debated on how to move forward with unemployment benefits, Varga said. “The Clowes Fund helped remove those barriers.” he said. “When a single mom lost her job at a restaurant, we were able to stand in and help fill in the gap.”

As part of its mission, La Plaza, Inc., another Clowes Fund grant recipient, provides one-on-one counseling to Hispanic high students to improve their chances of graduating from high school and college. The team also provides support to the families of the students, ensuring that they receive healthcare, utility and rent assistance, and other resources.

The pandemic complicated the ability to deliver those services because most of the engagement had been in person, said Miriam Acevedo Davis, president and CEO of La Plaza, Inc.. Also, La Plaza was sensitive to the increased need for mental health counseling as well as helping families understand the signs of anxiety and depression.

“It was an enormously scary time,” Acevedo Davis recalled of the first several months of the pandemic. “We were serving an area that had been identified as a hotspot, based on a lot of the information we had.”

La Plaza team members initially worked from home, ensuring that the families they served were adequately protected with PPE, medical services, food, childcare and other resources. Additionally, they were sorting out the complications of working with some students who were trying to study from home without WiFi or had the responsibility of caring for younger siblings.

Acevedo Davis described the Clowes Fund grant as extraordinary for several reasons. Not only was the grant unsolicited, it was issued quickly and without restrictions.

Acevedo Davis said those factors were critical. “We did not have to worry about writing a report about what we’re going to do and anticipated outcomes, or spending a lot of time tracking it,” she said. While La Plaza has processes in place for reporting and tracking, additional restrictions would have been difficult to complete at a time when employees were working from home and working hard to meet the needs of the community they served, Acevedo Davis said.

“They (Clowes Fund) told us, ‘We want to get the money to you quickly. We know you’ll do a good job supporting the most vulnerable,’” Acevedo Davis said. “With those restrictions gone, we could move quickly so that students and their families could get the critical help they needed during a difficult time.”

Acevedo Davis said The Clowes Fund, along with other local funding sources, have provided critical support during an incredibly challenging time for nonprofits and the communities they serve.

“We are in awe of how quickly our funding community moved to provide funds to organizations,” she said.