And while running the nonprofit that oversees multiple federal, state, and local workforce development activities for Marion County is a gargantuan task, a bigger hurdle was engaging and getting the city’s young people employed.

The data was challenging. In 2014, the Brookings Institution released a 12-year longitudinal study that examined youth employment rates in the 100 largest U.S. metropolitan areas. What they found was troubling. Labor participation for ages 16 to 19, had fallen from 49 percent to 28 percent. Added to that was another report by The U.S. Bureau of Labor Statistics that teen employment had declined with every recession since 1979, and was projected to further decline through 2024.

Both reports raised concern for the future prospects of Indianapolis youth and the economic vitality and quality of life in Central Indiana. More importantly, jobs were changing.

EmployIndy was undaunted, and there was another reason to reverse that trend. The time was right.

“There’s another report by JP Morgan Chase about how much money people don’t earn because they start their work history later on in life. There is just a lot of evidence to show that employment as soon as young people are able to be employed is so critical not only for them but for the community and we hope employers as well. So lot of our effort is there,” Mackintosh said.

“There is a drastic change in the community. What we are aiming to do is to create more synergy especially in the youth employment space, youth opportunity space. Without question, we are absolutely trying to reverse the trend,” said Mackintosh.

The Jobs for American Graduates Program (JAG) is part of the agency’s dropout prevention strategy and an initiative for the younger end of the spectrum. In partnership with Junior Achievement, the program includes a day-long experience at the State Fairgrounds for all eight graders to be exposed to all the careers in the community.

Another effort is the mayor’s ProjectIndy, a youth jobs program designed to connect teens to employers. This is the third year for the online portal that EmployIndy oversees. According to Mackintosh, the mayor wanted a single application for teens because if an individual wanted to apply to the Parks and the Y, he or she had to do it twice.

“We have connected so many more of the dots for young people so they aren’t as confused about where to go to find opportunities. That’s been cool,” said Mackintosh.

“What we’ve done is create a common space where young people can see where the close jobs are and created a basic entry-level application. In some instances, it populates to individual applications, but we still haven’t yet solved that single uniform application for all employers.”

Last summer, 3,398 young people completed the application, and so far this year,1,866 teens have. The program is competitive because it offers not only jobs, but training and mentors.

Additionally, EmployIndy has made progress in becoming a partnering organization by joining with youth-serving organizations that work with this age group. Programs like TeenWorks, GroundWork Indy and Marion County Commission on Youth (McCoy) are part of the network.

Together this network, made up of a broad group of community organizations with varying levels of service-delivery models, has worked to determine the best investment. McCoy, for example, receives funding that is passed through EmployIndy to provide employability skills training for summer jobs.

“The challenge with integration of services has been understanding the youth providers and their competencies and strengths, so that we can invest appropriately for the best outcomes for the individual, the provider, the community and the employers,” said Mackintosh.

Tammie Barney, TeenWork’s president and CEO, is one of those providers. Every summer, the nonprofit finds employment for nearly 500 teens. Working together with EmployIndy, the agency has submitted collaborative proposals, like one to the Department of Labor that resulted in $2.3 million grant.

Barney, who has been in her role for just over two years, said EmployIndy adds structure. Meetings with agendas are opportunities to announce EmployIndy’s Requests for proposals (RFPs), explain the mechanics of the application and field questions for participants.

Another benefit she said was learning about similar youth programs. Led by EmployIndy, the network comes together once a quarter to share goals, challenges, programming and trainings. One result was a workshop on Trauma Informed Care, a workshop that provides social work level training for youth workers who work with teens who have experienced trauma in their lives.

“EmployIndy brought it to all of us and said, ‘Hey, we have an opportunity for the community. Who’s interested?’ We all were able to take advantage of it,” said Barney. 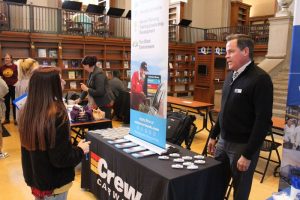 “There’s value in not recreating the wheel, and there’s a huge amount of value in the power of a network. If you are new, all of the resources that are already around the table can help you get to your goal faster. You can decide which population you want to focus on and learn where others are finding resources to support their work whether it is monetary or intellectual capital. Those kinds of things make it very, very valuable to be a part of it.”

Another service is the portal. This year 1,300 teens applied for TeenWorks’ summer program by the time applications closed in February. And because not all applicants were selected or met specific criteria, they were guided to use ProjectIndy’s portal.

“If there is a kid who fits into another program, we can make that referral so that they may be be picked up by one of those programs,” said Barney.

Both Mackintosh and Barney are excited about the job ready employability skills badge and curriculum that the group worked on and will launch this summer.

“I believe that we can potentially make a real difference with a very simple concept, just making sure that people are understanding basic employability skills, but that could really help reduce some barriers to employment. So I’m really excited about that,” said Mackintosh.

There are still challenges. One is to get a handle on the number of employed and unemployed young people in the city. Mackintosh said the community dashboard is a work in progress. Currently nonprofits report their information in slightly different ways with slightly different data systems.

“I think when we counted data systems, it were something like 20 different ones that existed out there. We are working to streamline that for reporting purposes, so that we’re not duplicating individuals, which results in an inaccurate count for us as an intermediary,” said Mackintosh. Data is key for funders’ reports, and especially when the nonprofit subsidizes teens’ wages.

“So right now the ProjectIndy dashboard is the best way to get at some of questions like, Are we moving the needle on youth employment? The portal allows us to see how many employers and young people we have signed up, how many jobs are offered and how many are getting matched? We will continue to grow the dashboard and it will help to inform the broader community.”

An outreach campaign is part of EmployIndy’s plan, using all types of social media, using both traditional and untraditional communications. A street outreach team is another part of the approach to meet the goals set in the organization’s strategic plan.

“How do we just make sure young people know about the places where they can get help if they want it? We have the ability, to scale and promote on behalf of our network of partners that there is a place out there for you to come to and feel safe and get help to get back on track.”

There’s just such an obvious connection between generational poverty, unemployment levels and crime.

“I think that when you just look at where some of the community’s problems exist, that it all ultimately points back to people having sort of given up for hope for better opportunity, for that American Dream. And we have got to help them believe that there is again opportunity. That takes a lot of effort not only on the part of organizations but the private sector as well. I think that when people feel like they have opportunity in the jobs and then they can be economically mobile and make a better life for themselves, I think they will chose that over other options,” said Mackintosh.