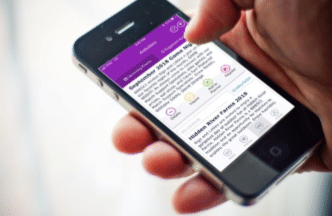 By charitableadvisorsJanuary 14, 2019Feature
No Comments

Editor’s note: January is National Mentoring Month celebrating mentoring and the positive effect it can have on young lives.

In 2010, Darcey Palmer-Shultz and Amy Pomeranz Essley had a significant problem to tackle. During their combined nearly 30 years of working for Big Brothers Big Sisters of Central Indiana (BBBSCI), they had taken on many issues, but this particular challenge gave them pause.

Big Brothers Big Sisters, which pairs adult mentors with kids in need of role models, had a match-retention rate they wanted to improve.  Palmer-Shultz and Pomeranz Essley knew that could be higher. But how to go about it?

Simultaneously, and perhaps serendipitously, Cummins, the Columbus-based engine company, entered the picture and made the nonprofit a unique offer.

BBBSCI could apply to train side by side with Cummins employees in the Six Sigma methodology, a series of techniques and tools for process improvement developed by Motorola in the 1980s.  Many manufacturing companies now use the method.

“It’s a lot more uncommon for nonprofits to use it, but Cummins had an opportunity where they would allow nonprofit partners to have somebody go through training and work with their team,” said Palmer-Shultz, the CEO of Big Brothers Big Sisters  who enrolled in the 2010 training.

For the Six Sigma study, Palmer-Shultz focused on how to improve the organization’s 12-month match retention rate. She was the only nonprofit leader in the room and found the process invigorating. She said the study resulted in defining 24 improvements that helped keep more of its matches together.

But this study led to other innovations, said Pomeranz Essley, who serves as chief program officer.

“While we were doing that research, we heard from Bigs (the organization’s nickname for its mentors) that they really wanted ideas of additional things to do with their Littles. So that’s kind of how we came up with the second study,” said Pomeranz Essley. At the time, Big Brothers Big Sisters was providing advance tickets for events and discounts, and the Bigs wanted more of this type of help. She enrolled in Cummins training in 2013 to learn the process and begin planning how to tackle the request.

Like the first training, this was another in-kind contribution from Cummins.

The result of the second study was a useful, but a somewhat unwieldy list of 200 different activity ideas outlined on an Excel spreadsheet.

“And we were like ‘Now, what do we do?’ We had to have some way to communicate this list out to Big volunteers,” said Pomeranz Essley.

Palmer-Shultz said they assumed they would simply post a list of activities on BBBSCI’s website – – pages and pages of them — but they quickly came to the conclusion there had to be a better way.

That realization was sparked by the fact that nearly 50 percent of the organization’s volunteers are under the age of 30.

“Again, we were thinking fairly small in the beginning, and then we got to the point, ‘If people are going to use this, it’s going to have to be what people are using now. It cannot be a piece of paper or whatever we might be able to come up with,’” said Palmer-Shultz.

So they reached out to a BBBSCI board member who had helped develop a web application for a one-day Giving Tuesday fundraiser to see if he might have ideas or questions for them.

According to Linn, the Cummins studies established the “whys” but together they determined that an app was the best solution.

Counterpart was able to develop the software for the administrative side for BBBSCI’s match-support specialists and others who manage the portal, but brought in another company, Crafted, as a partner because mobile is its expertise.

Development took place between August and December of 2015, with the launch in early 2016. The app cost about $60,000 to build with funding coming from Cummins, The Glick Fund, Opus Community Foundation, Midland Atlantic Properties and Lilly Endowment.

“We had some unique funding that paid for this, so we weren’t pulling from anything and definitely that made it possible. We had in-kind from our partners, which made a huge difference as well, significantly reducing the expense,” said Palmer-Shultz. Without partners who were invested in it, she said, they probably would have had to scale back what they were able to implement.

Called the Big App, it provides adult volunteers with a constant reminder of their training. Today, there are over 123 intentional-match activities and events that align with the 12 Indicators of Thriving. The tool helps Bigs find different opportunities and keep track on a pie chart of what they’ve done with their Littles.

“Each activity is linked to an Indicator of Thriving, which includes developing things like emotional competence. Scrolling over the indicator provides a definition, which is a helpful reminder. So as Bigs are using it and tracking activities, it shows them over time areas they are addressing,” said Pomeranz Essley. The hope is that having exposure to activities in the 12 areas will help staff see increased youth outcomes and growth.

“Basically, it allows a Big to more deliberately engage with his or her Little. As a tool, it organizes information about things to do,” said Linn, who’s also a Big. “It used to be email hell. Literally, it was an avalanche.”

The tool has streamlined communications between staff and volunteers, reduced internal printing costs and it allows the nonprofit to do ‘push notifications.’ For example, when BBBSCI has ticket opportunities that are relevant only for high school kids, they can target a segmented audience.

Since launching over two years ago, 98 percent of BBBSCI’s matches use the app.

“It was a change for them, but they really started to see the benefits of it,” said Pomeranz Essley. When the nonprofit implemented the first project, its goal was to get to 75 percent retention. Retention now exceeds and is sustained at over 80 percent.

In hindsight, there are other reasons why is the app is helpful, said Palmer-Shultz. The organization knows that what they ask of volunteers is a high threshold – overall length of commitment, frequency and responsibility to do it independently.

“Even though we support, coach and offer quite a bit, trying to make it as doable, rewarding and as simple as possible to be effective is really important,” she said.

While Counterpart provides two spreadsheets monthly, it collects and stores all the data. Linn said together they are now figuring out what is valuable and prioritizing the metrics. Ultimately, his company envisions providing an administrative dashboard to look at specific match engagements. The BBBSCI’s match specialist would already know what activities a Big and Little did, and be able to spend more time on the relationship and even helping to plan for the next one.

“So I feel like those are the things that are going to come next which not only saves the Big time, it saves the match support specialist’s time and now you’re focused on outcomes instead,” said Linn.

During the building stage, there was conversation about whether it was exclusive or if it should be built to have the capability to add agencies. Early on, the decision was the latter.

Agencies pay an annual fee, which helps cover maintenance costs and keeps the app fresh and up-to-date, including updating the organization’s new brand. Several agencies have paid to add features. Each, however, must receive Central Indiana’s approval first. BBBSCI owns the app code.

“Technology changes fast. This last year, we used (the fees) to upgrade just the behind-the-scenes engine because it was running slower and not as efficient. And it’s only three years old. And so, that didn’t get them any of the other ‘I-cannot-wait-for-this-upgrade stuff,’” said Linn.

Currently BBBSCI and the agency partners are in discussions about what this will look like in three to five years.

“It’s figuring out what we want this to do and how we want to keep using it in the future.”

Essentially Central Indiana designed the first round based on what it needed.

“But we have all these partners who have really good ideas and we are starting figure out together what the next step is,” said Palmer-Shultz.

This past fall, the Big App won a Centric award.

The Indianapolis-based network of resources brings together hundreds of leaders and practioners for a full-day event.

At the gathering, the Indiana Innovation Awards are given to individuals and organizations that are leading innovation in the state. This year, the Big App and its partners — Big Brothers Big Sisters of Central Indiana, Counterpart, Crafted — were recognized for this tech application.

Advice to other nonprofits

It is important to remember that sometimes the nonprofit and the tech company speak two different languages.

“It’s an education process for both sides,” he said. It was often that when the nonprofit asked a question, the tech company thought there was a problem. :In a sense you’re not even prepared for the question.

Pomeranz Essley said she didn’t even know the questions to ask.

It’s important to keep it simple.

“Our firm is nearly 25 years old, and we’ve learned over those years that you need to focus on the most minimal scope that provides value so it will engage the users.

“You can build a Cadillac but do you actually need power windows if you’re in Alaska. You and I can sit here all day, and we could dream and some of the stuff won’t be used. Remember for most nonprofits, you’re talking about a limited budget and no body wants to waste money. It needed to be very intentional.”