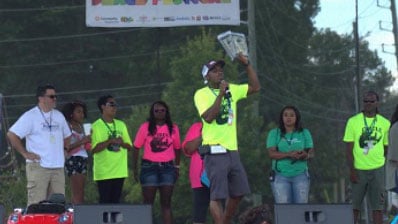 By charitableadvisorsMay 25, 2021Feature
No Comments

James C. Wilson, CEO and founder of the nonprofit organization Circle Up Indy, vividly recalls the day he was interviewed by a TV journalist for a story about his volunteerism in Martindale-Brightwood — an Eastside Indianapolis neighborhood plagued by poverty and high unemployment rates.

At the time, Wilson, who grew up in the neighborhood, was astonished that many of his neighbors were calling out to him during the taping … asking him to be a spokesperson on their behalf. “Tell them about the sidewalks! Politicians don’t care about us!,” Wilson said, recalling some of the pleas directed at him.

Those voices stuck with him, prompting him to step beyond his volunteerism to launch Circle Up Indy in 2014. The organization is focused on advocating for initiatives to transform impoverished neighborhoods in Indianapolis and surrounding counties, including Martindale-Brightwood.

Circle Up Indy also hosts an annual festival that is designed to raise awareness and intentionally discuss and address socio-economic disadvantages many black and minority families experience and to increase community accountability across the city, according to an organization statement.

Due to COVID-19, the festival was cancelled in 2020, Wilson said, but the 5th Annual Peace Festival is on for this year. It is scheduled for July 10, from noon to 7 p.m., at Frederick Douglass Park on the Park’s 100th Anniversary. Because of the late start in determining whether the festival would go on as scheduled, Wilson and his team are still seeking commitments for vendors and partners.

Wilson, who also has a podcast through a WISH-TV partnership, acknowledges that he sometimes feels overwhelmed with his role in transforming his childhood neighborhood and others like it. He said he feels a responsibility to advocate for transformation, which, in all too many cases, seems to be a slow process.

“I’m honored but I’m terrified. I just want to help people,” Wilson said. “There’s a lot of pressure on me to change things but at times it seems we’re barely pushing the needle. I’m watching friends and family die.”

Wilson, who spent most of his formative years — since the age of 10 — in and out of prison, has first-hand knowledge of the challenges facing some of the youth and families in troubled neighborhoods. “I never had a father teach me how to be a man. The streets taught me what I thought it meant to be a man,” he said.

During his last stint in prison, the trajectory of Wilson’s life took a turn for the better. He met several older inmates who saw his untapped potential. “These brothers taught me so much about life,” he said. “They kept reiterating, ‘they can take your body, but they can’t take your mind.’”

When Wilson was released after serving eight years of a 10-year prison term on a robbery conviction, he thought about those invaluable lessons and attended Ivy Tech, where he became active in volunteerism, including serving as student body president, regularly participating in Lilly Global Day of Service, and serving as president of Collegiate 100, an affiliate of 100 Black Men of Indianapolis.

It was then that his community work caught the attention of a television station, which led to that unforgettable exchange with his neighbors. “After that interview, I didn’t know what to do about all the issues going on in my community … no resources, no jobs, no housing opportunities, lack of quality education,” Wilson said. “They feel snubbed because they don’t see development in their community.”

He considered what he could do to encourage an investment of resources in the community to change outcomes, including health-related programs to address mental health and addiction.

Through Circle Up Indy, he has seen progress but not as much as he had hoped for seven years ago. He is encouraged that an increasing number of individuals representing various organizations have taken the time to visit the Martindale-Brightwood neighborhood, including executive leaders from Central Indiana Community Foundation, Lilly Endowment, Inc., and Community Health Network, a major sponsor of the 5th Annual Peace Festival.

He noted major milestones such as the opening of a 15,000-square-foot library in 2020 and the Kipp Indy Legacy High, a high school that was founded in 2019.

Wilson noted that housing is a major issue in the community. “Education is always a concern but it’s offset when you have housing issues,” he said. “No one feels comfortable in school if their home situation is not stable.”

Earlier this year, the city of Indianapolis announced that $3.5 million would be invested in the Martindale-Brightwood neighborhood as part of the Lift Indy program. Under the initiative, at least 10 low-income households will have the opportunity for homeownership through career coaching and home repair.

Wilson said he is hopeful that more changes are coming for Martindale-Brightwood through a strategic, comprehensive plan that takes into account the root causes of the problems in the neighborhood — not just the data.

“It’s just the beginning,” Wilson said. “It takes a community. Not just me. It takes all of us.”

About the 5th Annual Peace Festival

The event, which takes place on July 10, from noon to 7 p.m., at Frederick Douglass Park, offers a wide range of information and resources staffed by local organizations who will help the community focus on addressing untreated trauma, slow economic development, and community accountability through effective programs, resources, employment, entrepreneurial development, and educational opportunities.